Project TENGRIN UJDL STREET came to live during trips in Kalmykia while looking up „locations of power”. Tengrism, also known as Tengriism or Tengrianism, is a Central Asian religion characterized by shamanism, animism, totemism, poly- and monotheism and ancestor worship. It was the prevailing religion of the Turks, Mongols, Hungarians, Xiongnu and Huns, and the religion of the five ancient Turkic states: Göktürk Khaganate, Western Turkic Khaganate, Great Bulgaria, Bulgarian Empire and Eastern Tourkia (Khazaria). In Irk Bitig, Tengri is mentioned as Türük Tängrisi (God of Turks).

Tengrism has been advocated in intellectual circles of the Turkic nations of Central Asia (including Tatarstan, Buryatia, Kyrgyzstan and Kazakhstan) since the dissolution of the Soviet Union during the 1990s. Still practiced, it is undergoing an organized revival in Sakha, Khakassia, Tuva and other Turkic nations in Siberia. Burkhanism, a movement similar to Tengrism, is concentrated in Altay. 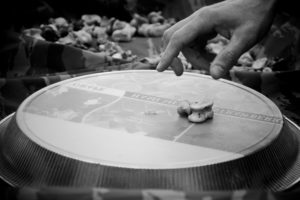 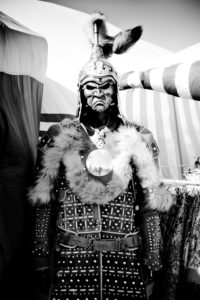 Khukh tengri means “blue sky” in Mongolian, Mongolians still pray to Munkh Khukh Tengri (“Eternal Blue Sky”) and Mongolia is sometimes poetically called the “Land of Eternal Blue Sky” (Munkh Khukh Tengriin Oron) by its inhabitants. In modern Turkey, Tengrism is known as the Göktanrı dini (“Sky God religion”); the Turkish “Gök” (sky) and “Tanrı” (God) correspond to the Mongolian khukh (blue) and Tengri (sky), respectively. According to Hungarian archaeological research, the religion of the Hungarians until the end of the 10th century (before Christianity) was Tengrism.

Tengrists view their existence as sustained by the eternal blue sky (Tengri), the fertile mother-earth spirit (Eje) and a ruler regarded as the holy spirit of the sky. Heaven, earth, spirits of nature and ancestors provide for every need and protect all humans. By living an upright, respectful life, a human will keep his world in balance and perfect his personal (Wind Horse). The Huns of the northern Caucasus reportedly believed in two gods: Tangri Han (or Tengri Khan), considered identical to the Persian Aspandiat and for whom horses were sacrificed, and Kuar (whose victims are struck by lightning). Tengrism is practised in Sakha, Buryatia, Tuva and Mongolia in parallel with Tibetan Buddhism and Burkhanism.

Tengrism has been called Nestorianism by Christian sources. Turkish Nestorian manuscripts with the same rune-like characters as Old Turkic script have been found in the oasis of Turfan and the fortress of Miran. It is unknown when and by whom the Bible was first translated into Turkish. Most records in pre-Islamic Central Asia are written in the Old Turkic language. Nestorian Christianity had followers among the Uighurs. In the Nestorian sites of Turfan, a fresco depicting Palm Sunday has been discovered.